28.03.2022 - Reporte de prensa
Business Report: KRONEN GmbH looks back on a successful year 2021
Despite the challenging circumstances, KRONEN GmbH, the globally operating food technology manufacturer based in the German town of Kehl, recorded positive results in the previous business year. 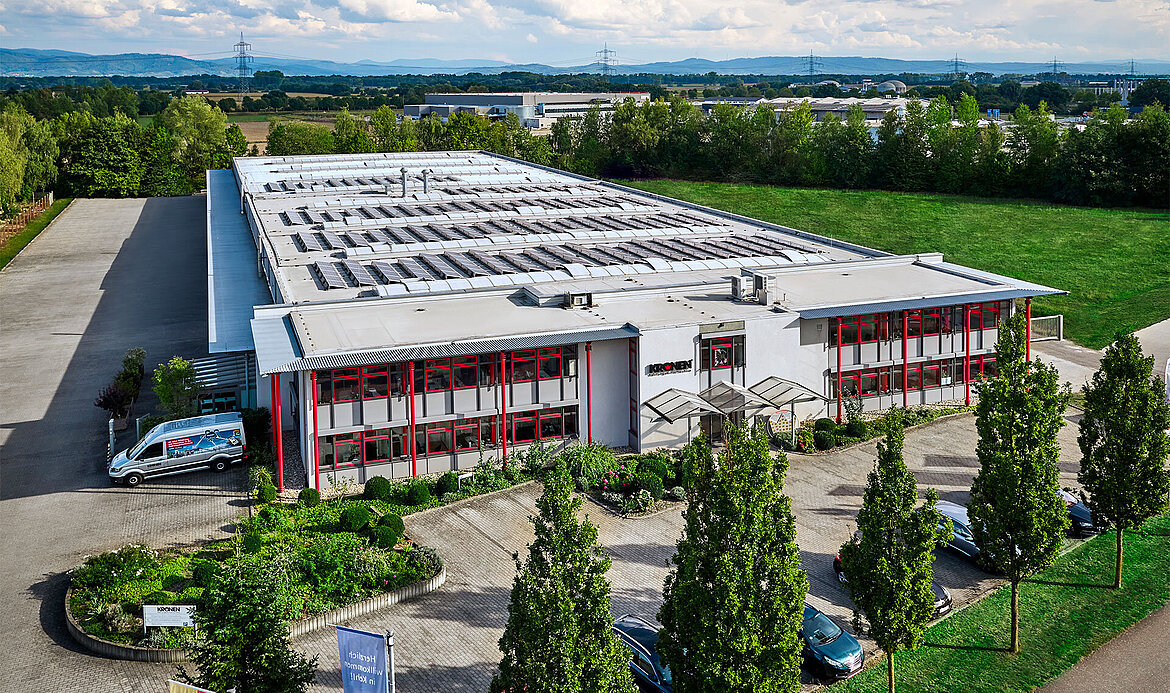 In 2021, the family-run medium-sized company was delighted to receive its largest ever order when a British manufacturer of fresh produce purchased four large salad processing lines amounting to a total of 3.2 million euros in Kehl. KRONEN is also planning several further developments for 2022 and is pleased to honor long-standing employees and offer new training positions this year.

With a turnover of 18.5 million euros, KRONEN achieved significant growth in the business year 2021 compared to the previous year. As a result, the company was able to fully compensate for the decline recorded in 2020, the first year of the Covid-19 pandemic, and continue the successful development experienced in the years prior to the pandemic. The year 2021 began with a difficult order situation at KRONEN GmbH, which led the company, like many others, to introduce short-time work for the first three months of the year. From the second quarter onwards, however, the number of incoming orders continued to rise. This improved situation reached its pinnacle in June, when KRONEN achieved a major order amounting to 3.2 million euros from a customer in Great Britain. On the whole, the number of orders and work volume improved steadily as the year progressed. In view of the good overall result, the company was also able to pay its employees both vacation and Christmas bonuses in 2021 and treat all staff to a special bonus of 1,000 euros in December.

KRONEN successfully countered the fact that no trade shows were held last year and customers could only be visited in person to a limited extent by using new means of communication. This modern technology enabled the company to provide customers with top-quality support and advice and complete orders successfully. “Many of the consultations with our sales team now take place via video conference from our showroom, where the team provides live demonstrations of machines. Inspection and approval of machines and systems ready for dispatch are also carried out via live chat. Our new major customer from Great Britain, for example, was regularly kept up to date on the manufacturing progress of its system via video link,” states Stephan Zillgith, spokesman of the Board of Management.

Other factors behind the positive annual result achieved in 2021 include effective cost management and the fact that the company was able to further improve its productivity and efficiency. Reduced involvement in trade shows and a smaller number of business trips additionally contributed to the result. KRONEN also benefits from its large international network of sales partners, which allows it to supply machines and processing lines to customers worldwide. Last year, its two subsidiaries in the USA and the Netherlands were particularly successful, and the company additionally exceeded its previous year’s sales by far in markets such as those of England and France.

In October 2021, KRONEN held its Online Customer Days in an attempt to use new means to compensate for the lack of face-to-face contact. It invited customers and prospects from throughout the international industry to enjoy a demonstration of expertise on the processing of salad, vegetables, fruit and other foods in an elaborately designed program. These first virtual Customer Days were a success for KRONEN GmbH. Over four days, the company held 11 workshops followed by Q&A sessions and around 60 live machine demonstrations, some for all participants and some for individual viewers. The event received positive feedback from its more than 270 participants from around 40 different countries.

An upward trend and staff growth also expected in 2022
The integration of the turned and milled part manufacturer WS Edelstahltechnik from the German town of Achern, which was taken over as a KRONEN division in 2020, was completed in 2021 with the successful certification of WS Edelstahltechnik’s quality management. Like KRONEN back in 2019, the company was awarded certification in accordance with the internationally recognized ISO 9001:2015 standard. This achievement again shines the spotlight on the company’s customer orientation and continuous further development. In line with KRONEN’s business development, the order situation at WS Edelstahltechnik also experienced an initial dry spell in 2021 before developing positively until the end of the year.

Both KRONEN and WS Edelstahltechnik increased their staffing levels once again and plan to fill further new positions this year. KRONEN is still benefiting from its high backlog of orders from the previous year and new inquiries received. The company is therefore optimistic as it looks ahead to 2022, especially given that the situation on the side of its customers, food manufacturers, is now easing.

“Our customers were affected by the impact of the pandemic to different extents. Companies that supply the catering industry and mass catering in schools, canteens and company cafeterias have recovered and are investing more in new machines. Customers that supply goods to supermarkets, delivery services and regional supply chains, as well as the organic sector, were able to benefit from the ongoing consumer demand for pre-washed and pre-chopped salads, vegetables and fruit, as well as frozen products, even during the pandemic, which enabled them to moderately increase their sales” explains Stephan Zillgith.

Another development, however, has had a negative impact on many companies, and KRONEN is no exception: challenging supply chain issues. Even reliable suppliers sometimes have difficulties delivering parts on time, and in 2021, even simple components that are usually delivered within a few days could only be delivered late. This situation is problematic in the current year and requires special commitment from the company’s employees as they search for missing parts on all channels – and usually find them.

Service anniversaries and new training positions
KRONEN now employs more than 120 members of staff. In 2021, 11 of these employees celebrated a special service anniversary. In the review of the year, which this time was transmitted in the form of a video message by the spokesman of the Board of Management, Stephan Zillgith, he thanked all staff on behalf of the entire management team and expressed special gratitude and appreciation to the company’s long-standing employees for their loyalty and ongoing commitment:

Such a qualified team and a value-oriented, appreciative corporate culture play a particularly important role for the family company. KRONEN has also been training future talents in-house for more than 20 years. For 2022, the company again advertised six training positions, only one of which is still vacant: Anyone interested in training as an Electronics Technician for Industrial Engineering can still apply for the position until April 30.